“I’m happy they’re still protesting. I thought they were going to stop after the first week because I didn’t see as many people out,” said resident Breanna Hicks.

Hicks lives right across from the police station, which is also ground zero for protests. She says it’s inconvenient but understands.

Pointing to a detour sign, she said,” I do have to go around the block to get to my house now, but I mean, that’s only after 5 o’clock.”

Last Sunday, Daunte Wright’s family led protesters as they marched from the site where he was killed to the police department.

Meanwhile, some residents near the police station say there aren’t many demonstrations during the daytime, but things change at night.

“They come out here with the lights, you know, and be on their loudspeaker, honking horns, and also stopping traffic,” explained resident April McHerron, who also lives across from the police station.

“They want justice. If it were my son, I would fight until the end,” she said.

The Brooklyn Center mom says the Wright incident has left a mark on the community that cuts deep into the soul of Black men who believe they, too, could be Daunte Wright.

“It’s crazy. It’s scary, especially me having a son. You know, and my son is now scared of the police officers and staff,” said McHerron. 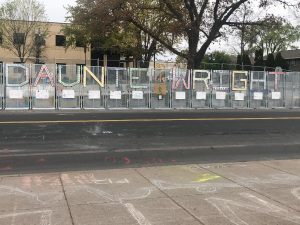 Brooklyn Center officials, meanwhile, are calling for healing.  They recently hosted the first of a series of community listening sessions to get feedback from residents.

“We are heartened to be seeing and hearing both the compassion and the resilience of our residents and business owners, as we strive to be accountable to those we serve,” said Mayor Mike Elliott in a statement provided to CCX News.

Meanwhile, some residents are calling for the protests to continue.

“Just to let them know that we’re not going to stop until you guys stop. We’re not scared. We’re going to do what we have to do to show you that our lives matter,” said Hicks.