The Highway 252 reconstruction project in Brooklyn Center is stirring up controversy.

The city held a work session Monday night where concerned residents voiced their thoughts on the latest plans of converting Highway 252 to a six-lane freeway. 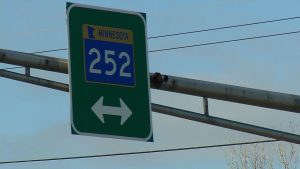 Intersections on the highway between I-694 and Highway 610 are considered some of the worse in the state. The latest plan includes building interchanges on 85th Avenue, Brookdale Drive and 66th Avenue.

Highway 252 Safety Task Force members said the proposed interchange on 66th Avenue is not safe due to the distance between interchanges.

“This one is only 800 feet. All documentations says anything less than a mile. And each time it gets lower, fatalities get higher. We don’t want other people to die,” said Tara McCarthy with the 252 Safety Task Force.

George Hogetvedt disagreed with the task force. He said the current plan is the way to go.

“They’re against it because they live right over there,” Hogetvedt said.

“The moving of the 66th Avenue intersection to 70th or 73rd will impact all homes along 73rd Ave and Humboldt due to increase traffic mitigation,” Struve said. “There will be significant additional cost to Brooklyn Park. We are owners of half the intersection of 73rd Ave.”

So far, the 66th Avenue interchange is the only interchange funded. The Governor’s bonding plan includes $50 million for the project.

Residents worry that if the city does not come up with a consensus, they may lose an opportunity.

“My greatest fear is that MnDOT will say ‘if you cant make up your mind, we’ll spend our money elsewhere’ and 252 will never change,” Hogetvdt said.