Brooklyn Center has been preparing for possible unrest during the trial of Kim Potter, the former Brooklyn Center police officer who fatally shot Daunte Wright. One change that the city council is considering could be temporarily changing the process to call for a curfew.

The city council is considering establishing criteria that would temporarily give the city manager the power to declare a curfew. You can listen to the entire discussion here.

City manager Reggie Edwards referenced the unrest during April and May and the difficulty in communicating a curfew in a timely manner.

“Staff and community was really challenged by our ability to, in a timely way, provide when  a curfew would go into effect and allow people to make appropriate arrangements,” said Edwards, when speaking to the council in Monday night’s meeting.

Fire Chief Todd Berg also spoke about the need for a process to call for a curfew in a timely way. He specifically mentioned the relationship with Metro Transit and ensuring residents could get home on the Humboldt Avenue bus line.

“We heard from the community that last minute curfews were hard,” said Berg. “What we’re asking is the pre-advertising at 1 o’clock would be the important part of community involvement and getting the community aware and give them proper time to plan or prepare for a curfew that night.”

Edwards said the measure doesn’t preclude or exclude the mayor from declaring a curfew and it does not create a blanket curfew. Instead the city manager could declare one only if it is warranted by certain established criteria. Edwards said the intent was to establish criteria and not an automatic curfew.

The change would require a unanimous vote, and the council seemed clearly divided.

Brooklyn Center Council member Kris Lawrence-Anderson called it a “common sense approach” that would help promote peace so people could continue to go to work and school after the verdict.

Both Mayor Mike Elliott and council member Dan Ryan expressed a concern for more clarification and time to think about the measure.

The matter was postponed to Nov. 29, which is one day before the Potter trial begins. 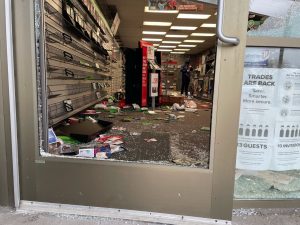