The Brooklyn Center City Council expects to vote Monday on police reform measures. It’s a plan that will eventually change how the city responds to police calls with a mental health component, as well as non-moving traffic violations.

One budget proposal put forth by Brooklyn Center City Manager Reggie Edwards would invest more than $1 million toward police reform measures that the city council approved last May under the Daunte Wright and Kobe Dimock-Heisler Community Safety and Violence Prevention Act.

To help fund the plan, the city would freeze three vacant police officer positions, meaning they wouldn’t be funded in the 2022 budget. According to Edwards, it would provide roughly $303,000 toward police reform measures. Edwards said the police department was consulted on that option.

The city would also increase the lodging tax, which would net another $52,500. The city manager’s proposal is about $357,000 less than what Brooklyn Center Mayor Mike Elliott proposed.

Edwards’ adjusted budget proposal adds nearly $367,000 from a previous plan to total roughly $1.2 million. He says it’s meant to satisfy the “spirit of the resolution” that the city council approved for police reform.

The proposal would not reallocate $1.2 million from 14 open police department positions that the mayor previously discussed during a contentious meeting that lasted more than six hours on Monday, Nov. 29. 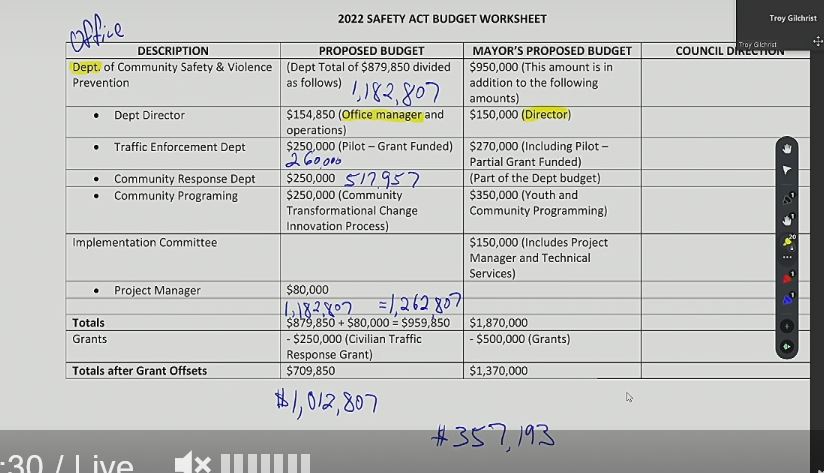 Brooklyn Center plans to create a new department, which the resolution identifies as the Department of Community & Violence Prevention. The new department would oversee police and fire and include a new community response unit for mental health calls and create a civilian traffic enforcement unit for non-moving traffic violations.

The city and the mayor have gathered feedback from a variety of groups and experts on models for mental health response, including Massachusetts-based Law Enforcement Action Partnership and Minneapolis-based Communities United Against Police Brutality.

The city plans to utilize an implementation committee to decide precisely how the city will ultimately respond to mental health calls. Options mentioned at Thursday’s meeting including contracting with Hennepin County’s Cope program, which deploys a mobile crisis professional to mental health emergencies. Mayor Elliott says the final round of interviews for the project manager of that implementation committee take place next week with meetings starting after the new year.

Deciding whether the city’s response would be 24/7 or 12 hours a day initially would come down to cost. The difference is about $300,000 based on various feedback to the city. It’s unknown if the city will ultimately decide on a 24/7 model at this time. The city manager’s budget proposal is a 12-hour model. Mayor Elliott has pushed for a 24/7 model.

Edwards said that since it would take six months to have a community response unit up and running, his proposed cost of more than $517,000 would be sufficient in 2022 for 24/7 service.

As far as what could happen to the three officer positions in 2023, Edwards said a labor study and crime-data analysis will help determine that.