Authorities have identified the man killed Friday when his sports-utility vehicle slammed into the warehouse of a Brooklyn Center business. 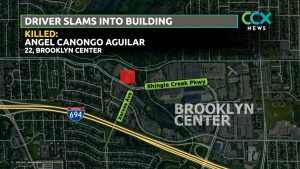 Brooklyn Center officers spoke with witnesses the night of the crash. Preliminary information indicates alcohol and speed may have been contributing factors, police said.