The Minnesota State Patrol has identified the Brooklyn Center man killed in a chain-reaction crash Monday afternoon on westbound Interstate Highway 94 near Highway 101 in Rogers.

Miguel Angel Deheza Perez, 42, of Brooklyn Center died at the scene, the patrol said. The crash, which occurred shortly after 2:50 p.m. Monday, involved a total of seven vehicles.

According to the State Patrol:

The initial crash happened when an Isuzu box truck slammed into the back of a stopped M2 Freightliner truck with a flatbed trailer in the right lane of westbound I-94. Perez was driving the Isuzu box truck that caught fire shortly after the crash. A passenger in that truck, Gabriel Efrain Cardoza Lara, 19, of Monticello, suffered life-threatening injuries and was taken to North Memorial Health Hospital in Robbinsdale.

Five other vehicles then collided after the crash with the two trucks. MnDOT video obtained by CCX News shows the aftermath of the crash and smoke rising from the accident scene. Other than the two in the Isuzu truck, no one else was injured in the crash.

One lane of westbound I-94 was closed for about four hours following the incident. 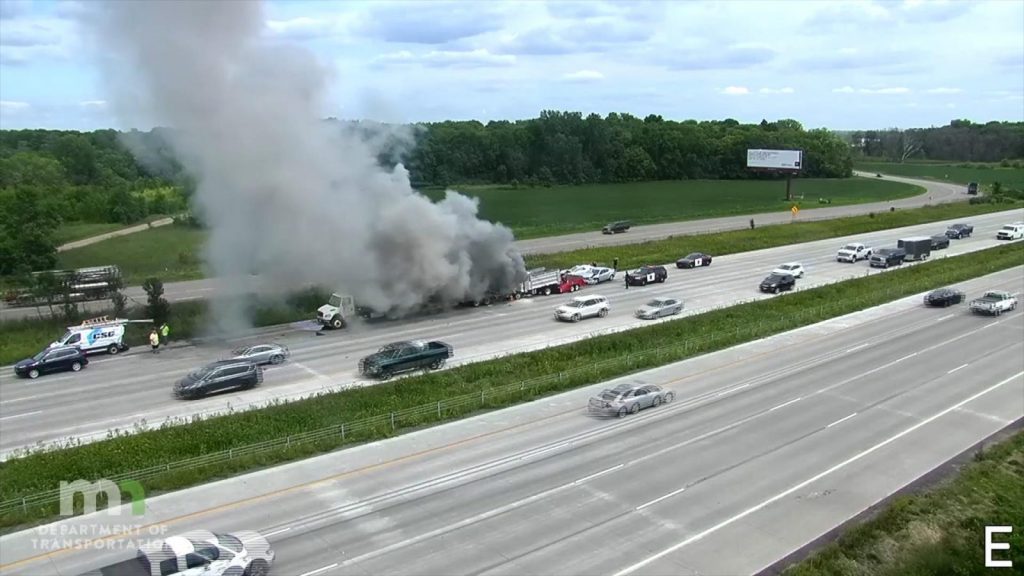 View of accident on I-94 in Rogers/Courtesy MnDOT