Brooklyn Center police are investigating a fire early Wednesday morning that authorities say is suspicious. Firefighters and police were first called just before 4 a.m. on a report of an explosion and fire in the area of 69th and Morgan Avenues North in Brooklyn Center. When they arrived, a detached three-car garage was on fire in the 6900 block of Morgan Avenue North. 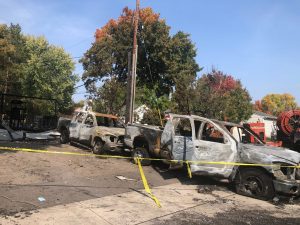 Aftermath of fire/photo by Sonya Goins

Authorities say the garage and and three vehicles were destroyed. There was also minor damage to the house, said Brooklyn Center police Cmdr. Garett Flesland. No one was injured. Police and firefighters also rescued three dogs and five puppies from the home, Flesland said.

According to police, the homeowners had a fairly large “Trump 2020” sign that was destroyed. Officers also observed what appeared to be fresh paint on the garage before it burned down. The spray paint included “Biden 2020,” “BLM” and capital letter “A” with a circle around it.

The Minnesota Arson Reward Project is offering a reward of up to $5,000 for information leading to the identification of persons responsible for the fire. The Arson Crime Reporting Hotline number is 1-800-723-2020. 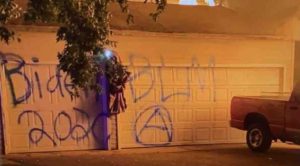