As COVID-19 largely confines Minnesotans to their homes, area automotive businesses are getting creative to keep revenue coming in. From dealerships to service garages, local shops are stepping up to the challenge of dealing with the coronavirus.

Victory Auto Service owner Jeff Matt says his repair shops – located throughout the metro including Brooklyn Park – are working to allay customer fears of getting sick, and they’re offering new services to do it. One venture is a concierge service, which they started last week. Victory staffers will pick up cars from customer’s houses, and drop them back off – after sanitizing them and their keys – when the work is done. “We’re trying to think outside the box and be proactive,” Matt says. He notes other shops around the country have tried this, and gotten good results.

That said, Matt has still noticed a drop in business. People staying home aren’t driving much, and that means they aren’t noticing problems that might develop on their vehicles. But Matt says the coronavirus-enforced societal slowdown is a chance for car owners to play catch-up on work they may have put off because they were too busy. “Historically it’s a known fact that there’s a lot of unperformed maintenance on vehicles,” he says. “Cars aren’t going away; maintenance needs to be done. Take advantage of the downtime” 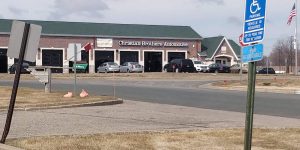 Victory is a long-established repair business in the Twin Cities area, but in Maple Grove, John Nelson just opened his branch of the Christian Brothers Automotive chain in January. While business was going well, Nelson says they’ve definitely noticed a downturn over the last two weeks. “Even though we’re still a young business and we just opened in January, we have already felt the slowdown and it’s probably going to get worse,” Nelson says.

Like Matt, Nelson plans to keep his doors open, and he’s also offering what he calls a contact-free service where his workers will pick up and drop off customer cars from their homes. And he’s willing to work with people who might find themselves in financial difficulty during the governor’s stay-at-home order. “We’re being intentional to take situations case by case,” Nelson says. “If there are customers who are struggling financially or on unemployment… We’re blessed to have our doors open. We’re willing to work with them.”

Dealerships Feel The Impact Too 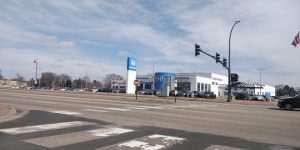 At Brookdale Honda in Brooklyn Park, General Manager Jim Haertzen says they’re seeing a drop in business as well – as much as 50 percent this month. That drop is likely to increase next month, as the numbers for this month include the first two weeks when customer traffic was normal. The reduction means the dealership has had to lay off some workers. “We’re at half staff,” says Haertzen. “We put people on for a week, off for a week to try to get ’em out of here.” Between the lower customer numbers, and the lower employee count, Haertzen says it’s easy for his dealership to practice social distancing.

But while some dealerships around the country are worried because factory lines are closing down and new cars aren’t being sent out, Haertzen says his dealership’s inventory is more than healthy. “I’ve actually got too many cars right now,” he says. That’s thanks to buying a large number of cars in anticipation of the Spring sales season. “Got plenty to last through the summer and beyond.”

Extra inventory and low customer traffic means deals are possible. “As crazy as it sounds, this might be the best time to buy a car,” says Haertzen. But serious buyers only, for now – “This is not the time for tire kicking or casual shopping.”

Brookdale Honda and its parent Luther Automotive are also buying cars from people who feel the need to unload them quickly – those who need to get rid of a car payment, or just don’t want the car. For both buyers and sellers, the dealership will work to let people handle the transaction remotely. They’ll pick up cars they buy from the seller’s home, and online shoppers can buy their vehicle without spending any time inside the dealership.  Haertzen already sold a car to one person who stayed in the parking lot – he brought the purchase papers out to her.

That no-dealership experience is likely to continue even after COVID-19 is gone. Haertzen is already thinking about making the option available as a standard practice. “This is gonna change our model for years to come,” he says. “That’s how we’re approaching it.”