A word of warning this Halloween from Golden Valley police to parents of trick or treaters.

Police are alerting residents about so-called “rainbow fentanyl,” which is a powerful opioid drug that’s made to look like candy.

Consumption of the drug could be deadly.

Golden Valley police say there haven’t been any recent reports of fentanyl incidents within the city, but cases are on the rise across the country; so they’re asking parents to inspect candy packaging for tampering.

“Fentanyl is starting to look like candy,” said Golden Valley Police Chief Virgil Green. “You would think Skittles, here’s a bag of Skittles, everything is good. But you’ve got that criminal element out there who are looking to harm teenagers and kids.”

For a safe Halloween option, Golden Valley’s police and fire departments are hosting a “Trunk or Treat” event on Saturday, Oct. 29 from noon to 3 p.m. in the City Hall parking lot.

Families can grab candy from city vehicles and enjoy live music from the Teddy Bear Band. 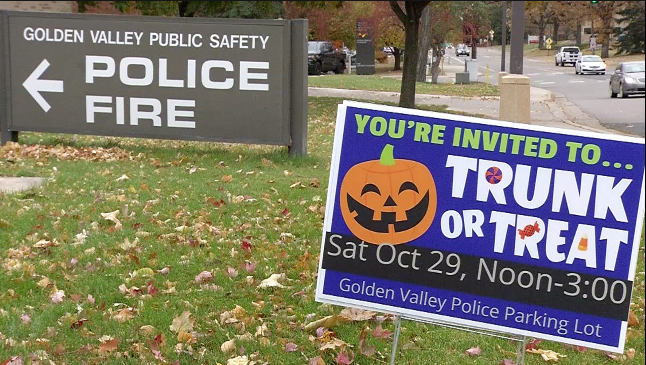 Golden Valley’s police and fire departments are hosting a Trunk or Treat event for families on Saturday, Oct. 29 at Golden Valley City Hall.