It may have been chilly in Maple Grove Wednesday morning, but a group of people from Len Busch Roses in Plymouth brought warmth to a bunch of random strangers. 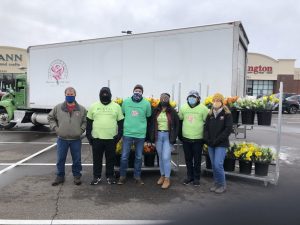 The crew from Len Busch Roses who braved the cold to hand out flowers in Maple Grove.

The giveaway was part of an annual event called “Petal it Forward,” which was established by the Society of American Florists for the sole purpose of letting people experience the joy of receiving flowers.

The group from Len Busch Roses teamed up with Maple Grove Floral to hand out dozens of bouquets such as marigolds, lilies and roses.

“As a floral designer, I hope that this just evokes in the minds of people to do this other times of the year,” said Georgia Edgington, the lead floral designer from Len Busch Roses. “To randomly, in the next few months, especially with the holidays coming, think of going to your local flower shop and just having flowers delivered to somebody.” 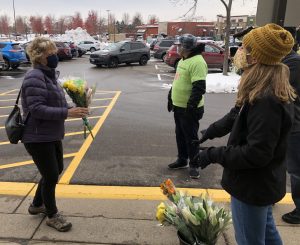 An unsuspecting woman who received a free bouquet of flowers.

The hope is that anyone who receives a bouquet of flowers won’t just keep them all to themselves, but take a couple and brighten up somebody else’s day.