A Change of Ownership at Nonna Rosa’s, But Authentic Italian Fare to Remain

At Nonna Rosa’s restaurant, the pandemic hasn’t stopped the phones from ringing, and customers from showing their support.

“It’s one of the only restaurants that I actually come to quite frequently,” said Bridget Frandsen, another customer.

Those customers have helped this Robbinsdale restaurant survive even the worst of times.

“There’s no protocol for how to run a restaurant during a pandemic shutdown, but here we are,” said Tina Suglia, who cofounded Nonna Rosa’s. “And thankfully, our customers showed us that they appreciated what we did in such great measure that we could continue.”

Suglia and her husband, Franceso, opened Nonna Rosa’s in 2010.

“When we first opened, my family members were like ‘are you crazy,’ You’re never going to make it in Robbinsdale,” Suglia recalled.

But the restaurant would become a forerunner to Robbinsdales’s thriving restaurant scene.

“We had no Pig Ate My Pizza, Travail opened shortly after,” said Suglia. “It’s been such a pleasure to watch the community grow with us.”

“Cooking is a really, it’s physically demanding. It takes a lot of concentration,” said Suglia.

It’s something Francesco Suglia has done his whole life, starting with working in a kitchen as a 12-year-old in Italy. That work ethic has continued to this day.

“Coming over here at 10 in the morning and leaving at 8 o’clock at night, seven days a week is no time for family,” said Francesco Suglia, head chef and co-owner of Nonna Rosa’s.

“We did it all,” said Tina Suglia. “From bartending to cooking to prepping to dishwashing to plumbing to grounds maintenance and tree planting and flowers. I mean, literally, there’s no part of this business we didn’t capture.” 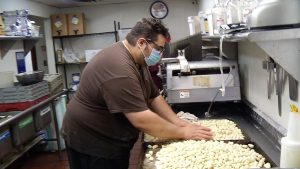 Francesco Suglia hard at work in the kitchen

A Change in Ownership

All that hard work did take a toll. The Suglias didn’t want to miss out on any more experiences with their now 6-year-old daughter. The COVID-19 pandemic added an extra layer, with their local school district needing to go to distance learning.

“And that’s something you have to commit to, you can’t just expect a 6-year-old to figure that out on her own,” said Tina.

The couple realized last spring it was time for a break. They found a friend and restaurant industry veteran who could take over and keep the restaurant going.

“We just felt there was value in keeping it operating even though we’re getting to that point where we wanted to take a rest,” said Tina Suglia. “For us it was like handing over our child.” 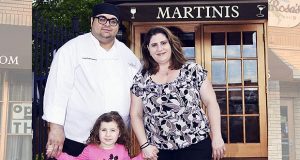 Francesco and Tina Suglia with their daughter/photo provided

In came Jessie Pfliger, who has years of restaurant experience and trained with the Suglias over the last several months to keep the family-owned restaurant consistent. Pfliger also hired an experienced chef who has trained in Italian cooking. The Nonna Rosa’s name will remain.

“Really the goal with transition is keeping everybody on board, and keep everything the same,” said Pfliger. “I really wanted to spend the time to make sure that we paid tribute to everything they built here.” 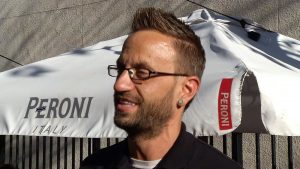 “We Just Don’t Know What’s Next”

The Suglias plan to get some rest and plan a family trip once the pandemic eventually allows. For now, they’re thinking family trips closer to home.

“We just don’t know what’s next. And that’s scary and exciting all in the same time,” said Tina Suglia.

As for their customers, they say they can’t thank them enough.