2020 was a tough year for a lot of businesses, but there were a few winners. At the close of last year’s golf season, the Minnesota Golf Association conducted a survey of 358 golf facilities around the state. They found courses reported their rounds played were up by an astounding 29.7 percent. 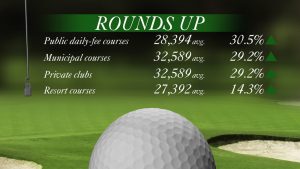 “Well we had our second most rounds ever. We did just under 42 thousand. I think in 1997 we were slightly above that. The year before 2019 was a pretty good year. We did 33 thousand. So 8 thousand more, or 20 percent higher rounds in one year,” said Don Berry, Director of Golf at Edinburgh USA in Brooklyn Park.

“In 2020 we did just shy of 32,500 rounds. So that was up almost 18 percent. It wasn’t a record for us, but it was an increase obviously,” said Jenny Stendahl, Golf Operations Manager at Rush Creek Golf Club in Maple Grove.

The New Hope Village Golf Course reported their highest usage of the course in the last 15 years.

Staff at local courses hope the numbers can continue in 2021. Rush Creek reports cardholder programs for the upcoming summer are already full or sold out.

Golf pro Don Berry at Edinburgh USA believes they’ll have a good summer this year too.

“If half the people decided hey, I used to play 5 rounds a year. Last year I played 20. I kinda had fun. I think golf’s in a good set for the next couple years,” said Berry. 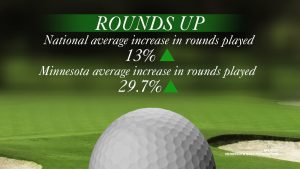