Following an outstanding freshman season at the University of Arizona, 2019 Hopkins High School graduate Zeke Nnaji has declared for the NBA Draft.  First rumored over the weekend, Nnaji posted a statement Tuesday on his Instagram account: 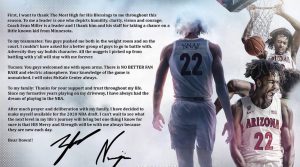 Nnaji was named Pac-12 Freshman of the Year and was named first team All-Pac 12 following a season in which he averaged 16.1 points and 8.6 rebounds per game for the Wildcats. He started all 32 games and ranked in the top ten in the conference in both scoring and rebounding. Nnaji is expected to be a late first-round selection. 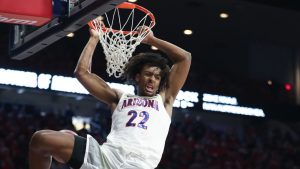 In his senior year at Hopkins the 6’11” Nnaji averaged over 24 points and nine rebounds per game in leading the Royals to a state Class 4A championship. He was all-state and named Metro Player of the Year by the Star Tribune. His younger sister Maya just finished her sophomore season at Hopkins and has been part of two straight unbeaten seasons with the Royals.