The Trojans are ranked number nine in class AAA while Eden Prairie is rated fourth.

The visiting Eagles won the first three matches to go up 12-0, highlighted by Charles Vanier’s 7-6 win over second-ranked Luke Koenen at 113 pounds. Vanier is rated fifth at 120.

The Trojans won a great battle at 152 as fifth-ranked Charlie Petit won 6-4 in overtime against third-ranked Terae Dunn.

But Eden Prairie’s outstanding closing duo of Dominic Heim (220) and Will Sather (285) won by fall to complete the comeback for the Eagles.

Both teams also defeated Rogers as part of the tri-meet. 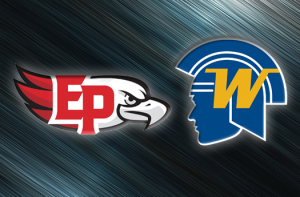