Saturday was quite a day for the Wayzata cross country programs.

And Wayzata’s Abbey Nechanicky raced to an easy win in the girls individual championship in a time of 16:47.7, earning her first state title after missing last year’s meet with an injury.

Sydney Drevlow of Hopkins was second for the second season in a row.

The Wayzata girls had four runners in the top 16 and easily won the team title with 39 points, 50 points ahead of runnerup Minnetonka.

In addition to Drevlow in second, Armstrong’s Caitlyn Osanai was 15th and Champlin Park’s Abby Hibbs was 18th.

The Wayzata boys finished well ahead of second place Rosemount, finishing with 57 points.

Hamza Mohamed was fourth for the Trojans, with William Weber (9th) and Daniel McCollor (16th) also cracking the top 20.

In class A, the Heritage Christian Academy boys raced to the team championship. 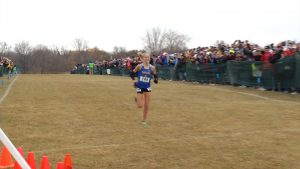