The 46-year old first noticed trouble with his breathing on December 29th was taken by ambulance to the local hospital. What initially was believed to be pneumonia, John’s health problems were actually tied to his heart.

He was on a ventilator for several days to assist with his breathing.

Two days ago surgeons at North Memorial Health Hospital in Robbinsdale replaced one of John’s heart valves and repaired another.

John’s sister Jaime says her brother’s long-term prognosis is good but it is expected to be a long recovery.

A GoFundMe account is now set up to help with his medical expenses.

2019 Champlin Park graduate Izzy Ashburn, part of the Rebels’ state championship team under Coach Yunker in the fall of 2018, has organized an all-day clinic for youth players at Minnesota Select Volleyball in Maple Grove on Monday, January 16th.

Ashburn is a collegiate All-American setter at Wisconsin and says several former Rebels’ players have reached out to assist at the clinic.

All proceeds from the event will go toward John’s medical costs.

Other fundraisers through different organizations are also being planned.

Yunker, a 1995 Osseo High School graduate, has coached Champlin Park to five section championships. He also coaches with the Synergy Volleyball Club and is an assistant coach in the Benilde-St. Margaret’s girls’ hockey program. 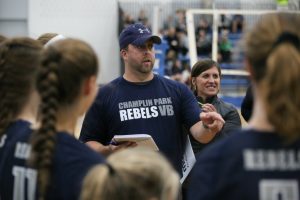