Over 200 youth volleyball players learned the finer points of the game at a fund-raising clinic Monday in Maple Grove.

The clinic was the idea of Izzy Ashburn, a former Rebels’ player under Yunker who now plays at the University of Wisconsin.

Several sessions were held, instructing players with tips in techniques in various areas of the game including serving, passing, and defense.

Coaches from across the metro area volunteered their time at the event, which raised around $16,000 to help with Coach Yunker’s medical bills.

He was released Tuesday from North Memorial Hospital in Robbinsdale after a two-plus week stay. 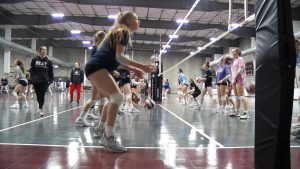