Each team scored once in the first quarter, and Breck capitalized on a Providence turnover to take a 14-7 lead early in the second quarter.

Providence dominated from there. The Lions scored three times in the second quarter to build a 28-14 halftime lead.

They scored the only two touchdowns of the second half and shut Breck’s offense down. The fourth quarter was played in a downpour. 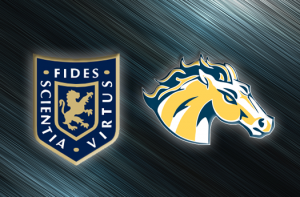