The Park Center football had its homecoming spoiled by visiting SMB as the Wolfpack beat the Pirates 24-14.

SMB is a co-op of St. Paul Academy, Minnehaha Academy, and Blake.

The Wolfpack built a 10-0 lead after the opening quarter and stretched the lead to 17-0 at halftime.

Park Center came out strong in the third quarter.

Isaac Davis blocked a punt to set his team up in good field position.

Jason Diggs capped a short drive with a 5-yard run to pull the Pirates within 17-7.

After an SMB fumble was recovered by William Russell, Park Center capitalized again.

Quarterback Dominick Brown rolled left and then tucked the ball away, cutting back to score as the Pirates pulled within 17-14 after three.

SMB scored the only points of the fourth quarter and held on for the ten-point win. 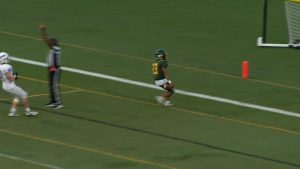