The Park Center boys soccer team wrapped up the regular season with a 3-2 loss to Blaine Thursday.

Park Center got one later in the first half as Johanso Camacho tucked one just over the goal line off a scramble to make it 2-1.

It stayed that way until very late in the second half.

Marius Keita of Blaine got a takeaway and buried a shot with just under three minutes left to give the Bengals a 3-1 lead.

Park Center’s Simon Ladagu converted an Angel Martinez pass to pull the Pirates within 3-2 with just over a minute left.

That’s as close as they could get though.

Park Center finishes the regular season with a record of 6-9-1.

The Section 5AAA playoffs are next for the Pirates. 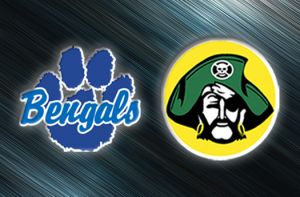