The Park Center boys soccer team will have some new faces in the lineup this fall as they try to build on a strong 2021 season.

The Pirates were 13-5-1 last season and reached the Section 5AAA championship game, but they graduated a lot from that team.

One of those lost is Mr. Soccer winner Sidike Jebateh, a dominant force a year ago.

The Pirates have some talented players who will have step into larger roles this season.

They expect to be strong in the midfield area as they build toward being a contender at playoff time. 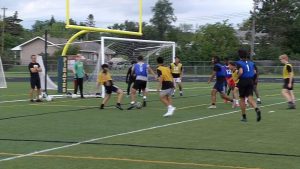