Kilzer helped lead the Crimson to a perfect 13-0 record and the state Class 6A title last Friday against Rosemount.

Kilzer ran for two scores and threw for another in the Prep Bowl.

In two-plus seasons as the Crimson starting quarterback Kilzer finished with a record of 26-2.

He will play college football but remains uncommitted. 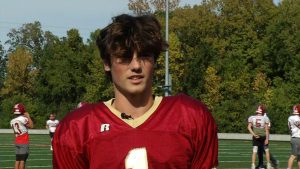