The Maple Grove football team capped a perfect 13-0 season with a 27-10 win over Rosemount in the Class 6A title game of the Prep Bowl.

Jacob Kilzer threw for a touchdown and ran for two more and Jacob Anderson caught a touchdown pass and on defense intercepted a pass and recovered a fumble as the Crimson forced the Irish into three turnovers.

It was the only loss of the season for Rosemount and redemption for Maple Grove after losing 13-7 to Lakeville South in last year’s Prep Bowl.

The Crimson offense totaled 321 yards and 27 points against a Rosemount team allowing less than seven points per game.

Jordan Olagbaju led the team in rushing with 77 yards on 15 carries and added one reception for 33 yards.

Defensively the Crimson held the Irish in check, allowing no points in the second half and just 208 total yards in the game.

Tanner Albeck and Henry Stang each finished the game with 14 tackles. 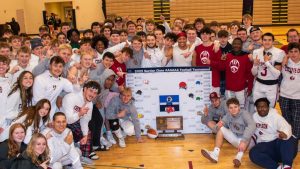