The Maple Grove baseball rallied from down 5-0 to beat Mounds View 7-6 Wednesday to win the Section 5AAAA championship.

The Crimson fell behind early but came back with a run in the second inning, three in the fourth and one run in the sixth to tie the game at five.

Mounds View re-took the lead in the top of the seventh, scoring an unearned run to lead 6-5.

But Maple Grove answered in the home half of the seventh with a leadoff double by Jacob Kilzer, followed later by a groundout and then an infield error that allowed Kilzer to score.

Chayton Fischer was then hit by a pitch and Mason South’s infield groundball was fielded cleanly, but the throw from shortstop to second base sailed into rightfield allowing pinch runner Kellen Riskedahl to race home with the winning run.

Michael Ross pitched 4 1/3 innings of relief for the Crimson, allowing just one unearned run while striking out four.  Fischer and South both hit homeruns for the Crimson.

Maple Grove (19-4) now advances to the state tournament for the first time since 2017.

The Crimson’s quarterfinal round opponent and game time Tuesday at CHS Field in St. Paul are still to be determined. 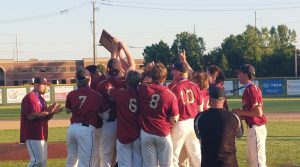