Tusler was an assistant for the Macalester men’s program last season.

He was a high school head coach for the Monticello boys program for two seasons, and led the Magic to state berth in 2021.

Tusler played football and basketball at Bethel, graduating in 2018.

As a player at Osseo, he helped lead the Orioles to the state class AAAA title in basketball in 2012 as a junior.

In his senior season in football in the fall of 2012 Tusler was named Mr. Football. 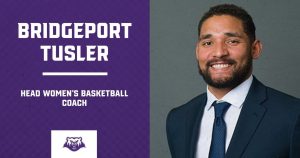