Jaxon Howard, perhaps Minnesota’ top prep football recruit from the Class of 2023, is set to make an announcement on which college he will attend.

The Cooper High School senior-to-be has been heavily recruited nationally the past couple of years and has narrowed his schools to four:  Minnesota, Miami, Michigan, and Louisiana State.

The four-star recruit made official on-campus visits to all four schools this month.

Howard has been a standout tight end and defensive end for the Hawks but is projected to be a defensive lineman in college.

A ceremony will be held at 6:00 pm Friday in the Cooper High School Auditorium where Howard will reveal his choice. 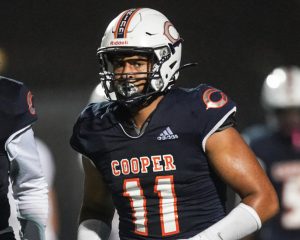