The University of Wisconsin volleyball team is playing in its third straight Final Four this weekend. Champlin Park High School graduates Sydney Hilley (2017) and Izzy Ashburn (2019) are two of the keys to the Badgers success this season.

Both women have both played in all 32 matches for the Badgers this season.

On Wednesday Hilley was named an All-American for the third straight season and is a three-time Big Ten Setter of the Year.

Ashburn, a defensive specialist, broke her own school record for ace serves in a season.

The Badgers (29-3) play undefeated Louisville in the national semifinals Thursday night. Nebraska and Pitt play in the other semifinal.

The championship is scheduled for Saturday night in Columbus, Ohio. 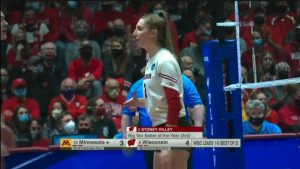