The Breck girls tennis team was looking to repeat as state class A team champion but the Mustangs were edged 4-3 by Rochester Lourdes in the championship match.

Breck’s Isabelle Einess won at first singles, but the Eagles won at two, three and four.

Breck’s strength in doubles showed up in wins at second and third doubles.

It came down to first doubles. Breck’s Petra Lyon and Whit Mehbod rolled to a 6-1 win in the first set, but Ryann Witter and Ellie Liese rallied to win in three sets, giving Lourdes the title. 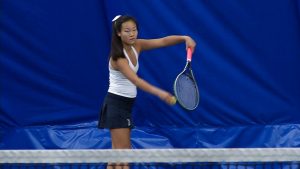