In 2010 Robbinsdale residents Gary Tonsager and Wally Langfellow started the Baseball in Benin project, hoping to bring the sport to the small West African nation.

They brought equipment and helped teach the game to young players in Benin and have continued to coordinate efforts there.

This will be the tenth year that proceeds from the wood bat tournament will go to the project.

38 teams will compete in three age divisions Thursday through Sunday this week.

A team from Benin came to the Twin Cities and played in the tournament in 2016 and 2018.

The hope is to make that happen again, perhaps as soon as next year.

Langfellow says although field space is still hard to come by in Benin about 500 young players are in the baseball program there. 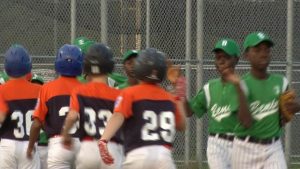