What’s Next for Former Park-and-Ride Site in Brooklyn Park?

It’s a development site that has Brooklyn Park residents talking and asking questions. They’re wondering what could go into a former park-and-ride site that the city owns.

The site in question is seven acres of land at the northeast corner of Noble Parkway and Highway 610. The city wants to eventually sell the property and develop it.

On Wednesday night residents heard from a panel that included a real estate expert and a developer who volunteered their time to discuss what could be feasible for the site. Residents who live nearby say they’re concerned about what could go there. Some don’t want a large housing project. 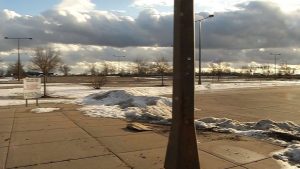 Ideas Range from Housing to a Grocery Store

For Carol Germ, it was her third meeting she’s attended on the matter. She’s hoping whatever gets built will be a pedestrian- and transit-friendly project to help people who don’t own vehicles.

“Some people want housing. Some people want senior housing, which I guess we’re short of. I like the idea of multi-generational housing that has lower income,” Germ said.

Germ pointed out rising rents and lack of affordable places to live in the community. Other residents CCX News heard from expressed a need for a grocery store.

“The neighborhood really wants some sort of small grocery store,” said Alyssa Bentz. “Trader Joe’s, a Fresh Thyme, an Aldi’s. Something like that would be perfect.”

Tom Hoffman, a real estate expert from Colliers International, volunteered to go over resident questions and discuss what could be feasible. He says the project that could make the most sense and be less risky for developers is one that combines housing with retail.