For 15 years, the Bunce family has brought theater to neighborhoods, turning yards into stages. For the last several years, a neighborhood in Dayton has gotten to enjoy the Maple Grove family’s creation, often with hundreds taking in the performance.

“It’s amazing how many people come out to see the show,” said Greg Bunce, who founded Bunce Performing Arts with his wife, Lori.

The Bunces started outdoor performances as a way to bring theater to their kids.

“My wife and I decided we wanted to give our kids a theater experience, looked around at summer camps. They were all one-two weeks long and pretty expensive,” recalled Greg Bunce. “We thought with our theater background, we could put a show on in our back yard and invite the neighbors to do it. So we did and it just kind of snowballed from there.”

Snowballed indeed. Little did they know that performances would now require many volunteers and police officers to help direct traffic. Bunce says shows can sometimes draw more than 1,000 people.

“Its become its own beast now,” said Bunce. 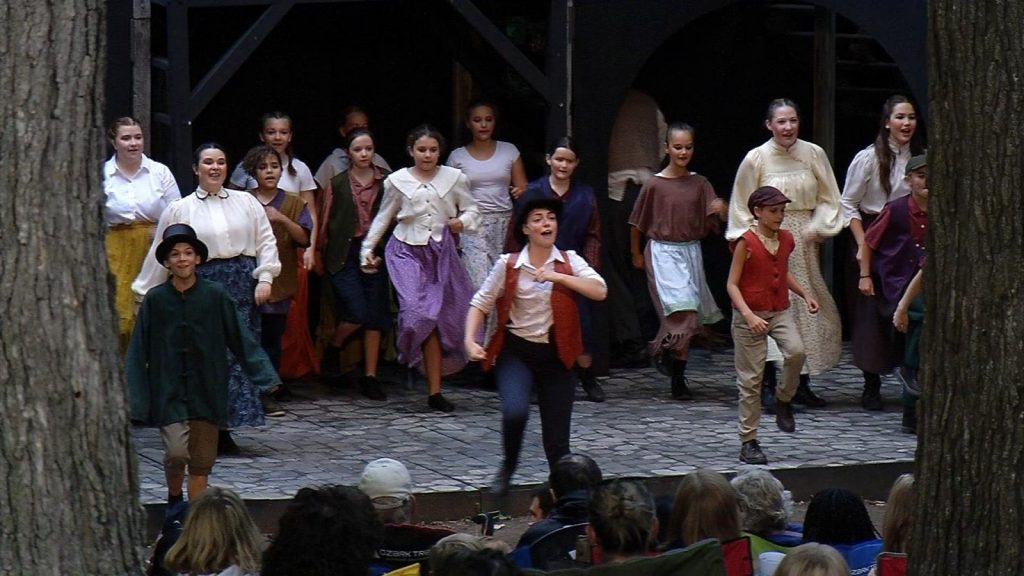 The latest production by Bunce Performing Arts is  “Oliver!”, which happens to be the first musical it did in 2007. During the outdoor theater performances, musicians perform not in a pit, but in a tent. Attendees are also encouraged to have mosquito repellent handy.

“We’re kind of dependent on how weather is going to be for a day,” said Megan Liesmaki, director of “Oliver!” “First of all, whether we can have the show or not, secondly how it affects the actors and their energy level. If it’s a really hot day, it’s a lot harder to perform in really thick costumes.”

Rain canceled one evening performance this past week. Other outdoor challenges sometimes spook the performers.

“There was actually this giant wolf spider that crawled up a girl during a dress rehearsal once,” said Elsie Erickson, a cast member with “Oliver!” “It was horrifying.”

For the cast members, performing outdoors brings a different kind of energy.

“It’s a different energy than inside because you never, normally, would see theater outside before,” said Zach Lowe, who plays “Oliver!”

The cast at Bunce Performing Arts also bring a breadth of talents and abilities.

“I think our youngest actor is 10, and the oldest is in their 60s, so kind of a wide range of experience and talent, but also all those ages bring different perspectives to the story, which makes it really sweet,” said Liesmaki.

Performances by Bunce Performing Arts are free. Attendees are encouraged to give a monetary donation or give a food donation to support CROSS food shelf.