A historic rise in violence continues to plague certain areas of Brooklyn Park. That includes three shots-fired cases this weekend and at least seven incidents of violent crime since early Friday.

The incidents included two different apartment buildings struck by stray bullets Saturday night in Brooklyn Park. In one of the cases, gunfire tore through a unit wall at the Fountains In The Park apartments. According to Brooklyn Park police, the shooting happened while a family was watching television in their living room. No one was hurt in that case.

“I think security and the police need to do their job and get up in these buildings, you know, and do some justice,” said Brooklyn Park resident Michael Johnson.

About 20 minutes later, gunshots rang out near Huntington Place Apartments. According to police, a bullet went through a kitchen window. A resident was in the kitchen at the time but was not hurt.

“Residents should not have to go through this. It is unacceptable,” said Santiago De Angulo, executive vice president of property operations with Aeon, the nonprofit working to transform the apartment complex. 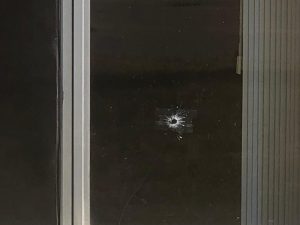 Bullet went through window of apartment unit at Huntington Place on Saturday.

Management team members at Huntington Place recently upgraded security features. They installed a guard shed and speed bumps to deter people who aren’t residents from coming and going. But they say this is only a band-aid.

“We have installed over 350 new cameras. We have more security. We have vehicle control access, but we feel that these are just temporary restrictions because there’s a bigger problem throughout the city of Brooklyn Park and around the country where there’s an increase of gun violence,” said De Angulo.

On Sunday, shortly before noon, shots were fired outside Park Liquor Outlet at 63rd and Zane avenues, which features several small businesses next to each other. Several bullets pierced the window of the liquor store. It’s the second time in the past two weeks in which gun violence occurred at this location.

“Violence’s job is to keep you in a place of being afraid and having to hide, and so, to create peace, you have to have a certain level of courage,” said Aja King with 21 Days of Peace, a group of volunteers that started patrolling the area on July 7.

King helps lead volunteers at 63rd and Zane with the goal of reducing crime with their presence. Organizers say it’s too early to see results, but they hope to make a change for the better.

“The goal is to turn this area around where families, women, and children, all sorts of people can occupy this space,” said King.