The school shooting in Uvalde, Tex., that left 19 children and two teachers dead reignited the debate on how to prevent gun violence in schools.

It’s a polarizing issue with a variety of proposed solutions.

“Obviously there are already over 400 million guns out in the U.S., so it’s a massive challenge,” said Anuj Kakkad, a sophomore at Wayzata High School.

Kakkad is one of several students involved with Wayzata High School’s Destination Imagination program who have spent the past year taking on that massive challenge.

“Obviously there’s going to be issues with every proposed idea to school safety, but it’s always a great place to start,” said Neev Zeroni, a sophomore at Wayzata. “Because if we don’t start somewhere, we’re never going to get anywhere.”

One of the students’ ideas would put radio frequency identification (RFID) in guns. It’s the same technology used in key cards.

“Almost everything you have to unlock something, there’s an RFID tag in there,” Zeroni said. “So our idea is to implement RFID tags in guns, and have long range RFID scanners in schools.”

The thought is that if someone with a gun equipped with an RFID tag tried to enter a school, the scanners would detect that gun and immediately lock down the building before that person can enter.

“These RFID tags are less than a cent to make and very easy to implement,” Zeroni said. 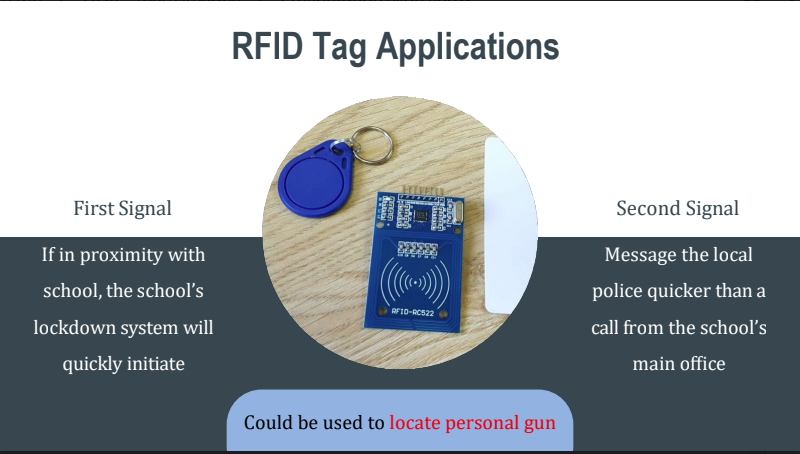 A slide from the students’ presentation about how RFID tags would help prevent gun violence in schools.

Another proposed solution would require insurance for gun owners that includes a mental health test.

“And if someone steals their gun and uses it for malpractice, they are no longer liable for that because their gun is insured,” Zeroni said.

Their ideas earned them first place at this year’s Destination Imagination global competition in Missouri.

Now, the hope is that policymakers can jump on board.

“We just hope that we’re making any type of impact,” said Jake Hoversten,” a Wayzata sophomore. “Whether that’s through actually passing laws and making direct impact with our plan, or inspiring other people to do the same.”

So far, the Destination Imagination students have presented their ideas to officials from the Plymouth Police Department and the Wayzata School District. Now they’re hoping to meet with representatives from the NRA.