Within the walls of Wayzata High School, it’s possible that you’ll hear Neev Mangal practicing for a debate competition.

After all, debate competitions usually take up a good chunk of his weekend.

He’s a co-captain of the debate team, and last year, he and a partner qualified for the national tournament.

“We did decent there,” Mangal said. “We could have had a better run, but I’m not super unhappy about it.”

Yet debate is only part of Mangal’s story. The Wayzata senior is a member of the student council senate, he’s co-captain of the robotics team, and he helped establish an organization called Sparkway Learning, where student volunteers teach their peers about various topics they won’t necessarily learn in school.

“The ultimate hope [with Sparkway Learning] is to get people introduced to these things,” Mangal said. “It’s kind of hard to get introduced to public speaking and debate. So when we do a public speaking class and we see a lot of those same faces show up to join our debate team in a couple of years, that’s a success to me.” 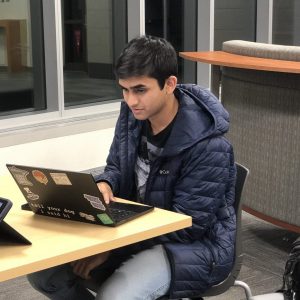 Neev Mangal is a senior at Wayzata High School in Plymouth.

‘He’s going to change the world’

Speaking of success, Mangal has also worked on a project with a University of Minnesota professor where he used artificial intelligence to look at satellite imagery of oceans and lakes and identify patches of floating plastic.

“When you know where plastic is, that can be really important in determining public policy, cleanup efforts, and just identifying the scope of the problem,” Mangal said. “Like which areas need to focus more on cleaning it.”

Staff members at Wayzata say that Mangal is the total package.

“He’s the one who’s going to change the world,” said Amy Swenson, Wayzata’s gifted and talented coordinator. “He’s the whole deal. He’s the one who is going to figure out some of the answers to the problems that we’re facing today.”

It’s not every day that a student like Mangal comes along. And while there are certainly high hopes for his future, he still has the rest of his senior year to worry about.