The city of Golden Valley now has a framework in place that will help developers reshape the city’s downtown area. This week, the Golden Valley City Council approved a downtown study framework plan put together by Hoisington Koegler Group Inc., a design consultant.

Any major changes to downtown Golden Valley will be years in the making, but the city now has a plan that they can show to people such as developers and state transportation officials that outlines their vision for the future.

“The future of Golden Valley is incredibly bright, and we’re creating that kind of infrastructure, doing what we can as a city to guide private development to create the opportunities that our residents want in the area,” said Gillian Rosenquist, a Golden Valley Council Member.

The final report details improvements, as well as implementation strategies, centered around redeveloping the four quadrants that make up the intersection of Golden Valley Road and Winnetka Avenue. 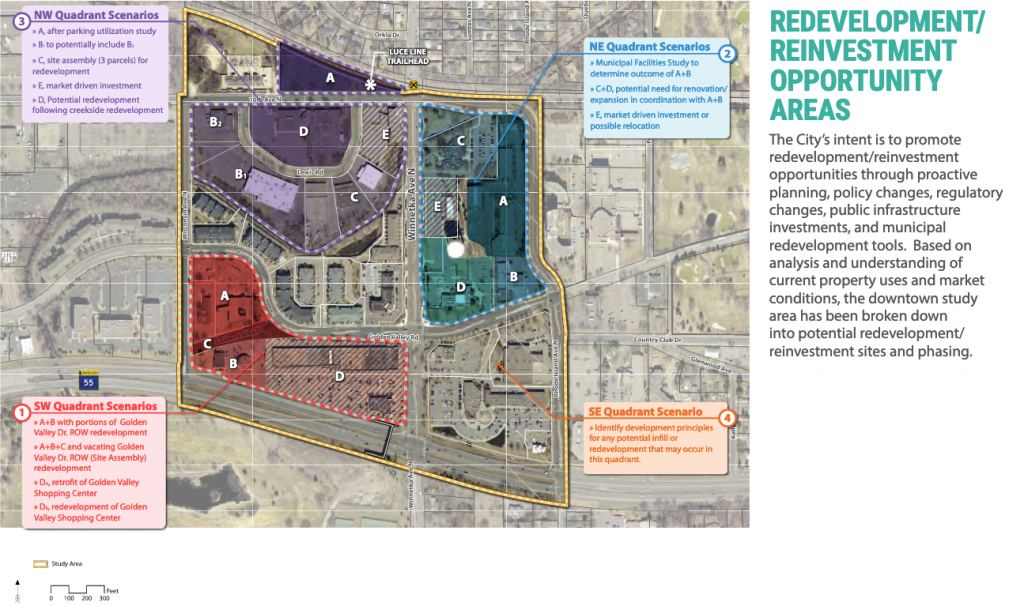 Opportunities include attracting a grocery store and pharmacy to the area, improving walking and bicycle access (such as building a new pedestrian bridge over Highway 55), redeveloping large surface parking lots into retail or housing, and relocating the city’s public works buildings outside of the downtown core.

“It gives me certainly a sense of what we can hope to achieve in the next 20 years or so,” said Golden Valley City Council Member Larry Fonnest. “This isn’t going to happen overnight. But we now have a vision and a direction and a path to follow.”

Implementation of this plan will take place over a number of years and would require the council to make a number of key decisions in the future.