The Aug. 10 Brooklyn Center Work Session started off like normal with the mayor announcing the public forum’s agenda and priorities. However, the Zoom conference quickly changed. City officials say at least two men hacked into the meeting, launching a diatribe of derogatory comments aimed at Black council members.

“I think there were two male voices that were making some racist comments, using the n-word,” explained Brooklyn Center Council member April Graves.

“I was concerned about my colleagues and all of my fellow Brooklyn Center citizens,” said Mayor Mike Elliott. 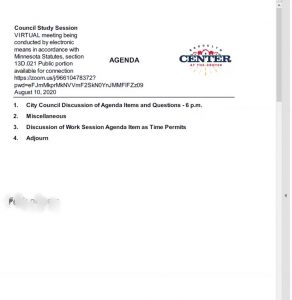 Hackers also took control over the screen, writing Nazi symbols and other hateful language for everyone to see. The Brooklyn Center mayor calls the incident horrific.

“I know this was specifically an attack seemingly on me, directed me, but it was an attack on all of us. I saw it as someone coming into the public space, and that represents the city of Brooklyn Center and all of the residents of Brooklyn Center collectively,” said Elliott.

After a few minutes, the city covered up the offensive language and muted the audio. The meeting continued.

But the hurt lingered.

“They came on the call to cause chaos and hurt and to those people of color that was on the call specifically, the council members,” said Graves.

Work sessions are open to the public. Residents sign up ahead of time to get a passcode. The council members said they received calls and messages of support, and from people expressing disappointment in what happened.

Since the attack, Brooklyn Center officials have been using the social media platform WebEx for meetings.