Robert Eastham gave his best sales pitch on Wednesday. The Army veteran served in Desert Storm and hoped to find a new job at a veteran career fair held in Brooklyn Center.

“I’ve filled out a lot of applications and really haven’t heard much of anything back,” he said.

Eastham, a former college administrator, lost his job last year. Despite the growing number of help wanted signs, some veterans, including Eastham, are still struggling to find suitable employment.

Since getting laid off, he’s been working odd jobs and even tried starting a company. Now he’s looking for something more stable.

He says veterans like himself often have attributes employers might not see listed on a resume, such as loyalty and discipline.

“Life skills that will make you a better person for your team,” said Eastham. “I think the military gives you a good work ethic and good skills to come out.” 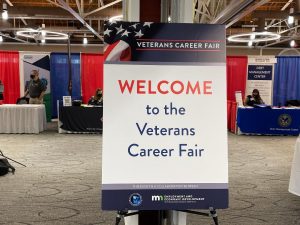 About 100 companies participated in the Veterans Career Fair on Wednesday in Brooklyn Center.

Employment experts say veterans are often underemployed and sometimes have a hard time transitioning from the military to civilian jobs.

“You come back from a period of service where things look familiar, and you understand the system, and you come into an economy, job market, and it might not translate one for one,” said Steve Grove, the state’s Department of Employment and Economic Development commissioner.

Justin Griego served four years in the Navy and is a former preschool teacher. He’s been looking for a job for two months.

“I had to stop working because I got hurt, and I’m trying to find something that’s less physical,” said the veteran.

Both job seekers say they are hopeful things will turn around for them soon.

“I’m hopeful I’ll get a job within the next month or so. It’s just a matter of I’ve got to find one that fits me right,” said Eastham.