Two people are dead following a drive-by shooting in Robbinsdale that happened right in the middle of Bottineau Boulevard.

The incident, which happened near the intersection of County Road 81 (Bottineau Boulevard) and 36th Avenue, shut down the city’s busiest street for hours.

“Another car pulled up and started shooting at the victim’s vehicle,” said Capt. Chad Stensrud of the Robbinsdale Police Department. “Which then, we believe, just rolled up to where it ended up around the 3700 block of County Road 81, and that’s where we found the vehicle when we responded.”

Officers responded to the scene around 3:40 p.m. Thursday where they found two people dead inside a blue car believed to have more than a dozen bullet holes in the windows and door frame. 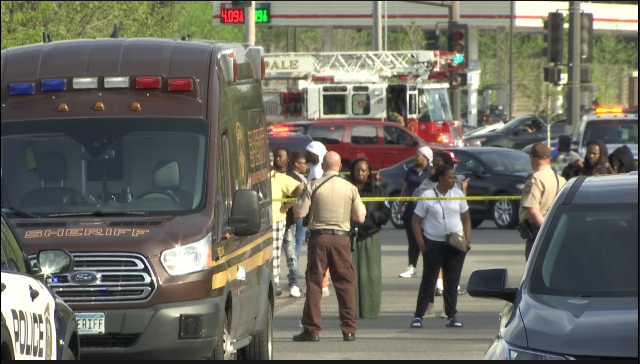 Robbinsdale, Minneapolis and the Hennepin County Sheriff’s Office are handling the investigation.

Investigators say the two victims, a male and a female, have yet to be identified by the Hennepin County Medical Examiner.

“We are treating this as an isolated incident. It wasn’t random. There was obviously some vengeance out for one party or another,” Stensrud said. “I would say, we don’t want people to be scared to drive around and be in Robbinsdale or anywhere in the area. But always keep aware of your surroundings.”

Robbinsdale, Minneapolis and the Hennepin County Sheriff’s Office are handling the investigation. If anyone has any information, call the Robbinsdale Police Department at (763) 531-1220.