The stadium at Brooklyn Center High School is home to multiple sports teams. But for the past three years, it’s lacked one key amenity: a functional lighting system.

“We’ve been playing day games for football, soccer, anything that happens out here has to be worked around when we have daylight,” said Nate Gautsch, Brooklyn Center’s athletic director.

In 2018, the lights shut off during a Centaurs’ football game. When Gautsch called Xcel Energy to fix the problem, he got bad news about the 30-year-old lights.

“They looked and they said, this is not a safe system to use anymore, and we cannot allow you to use it,” Gautsch said.

So for three years, the silver sentinels have stood high above the football field, disconnected from a power source.

“Since then, we’ve been working with how do we bring lights back,” Gautsch said. 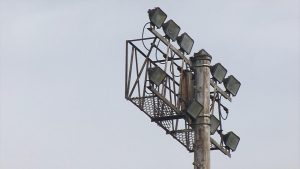 Help from an NFL star

Bringing the lights back is a goal that’s not easy for a small school district to accomplish on its own. But now Brooklyn Center has some help, thanks to Minnesota Vikings’ star receiver Adam Thielen.

“When Adam and Cate learned that the lights were red-tagged, and there were no Friday night lights, it really spoke to them. and they said we’re going to take care of that,” said Amy Sinclair, executive director of the Thielen Foundation.

The organization recently launched a campaign to raise $275,000 to help bring the stadium lights back to Brooklyn Center High School.

It’s an amenity that would put Brooklyn Center on par with the larger schools.

“So we feel like, if [the athletes] are successful on the field and feel good about themselves, that’s going to spill over into the classroom, and also into a future career,” Sinclair said. “So we really like to support them in that way.”

Stadium lights may not directly impact wins and losses, but a little support can go a long way to helping Brooklyn Center’s student-athletes reach their full potential.

“It’s a feeling that these kids deserve to have,” Gautsch said.

Officials from the Thielen Foundation hope to have a dedication ceremony in the fall under the new stadium lights, when they make their long-awaited debut.