Presidential history unfolded Wednesday. Joe Biden was sworn in as the 46th president of the United States during a time that historians say resembles hardly any other.

The inauguration of Joe Biden also brought a historic moment for women. With Wednesday’s swearing-in, Kamala Harris became the first woman to be vice president.

Michael Gold-Biss, a political science professor at North-Hennepin Community College in Brooklyn Park, said the historic significance of Harris being vice president resonates with not only his students but the diverse community at large.

“She’s the first in so many ways,” said Gold-Biss. “She was also sworn in by the first Spanish Supreme Court Justice. There’s so many firsts, but I would like to say that I hope this is a sign of normalcy. It’s not that she’s the first or will only be the first. Let’s not forget President Obama is the first Black president. So, she’s the second woman of color to be in the presidency, as vice president. So in our community, there is resonance, this is very recent.” 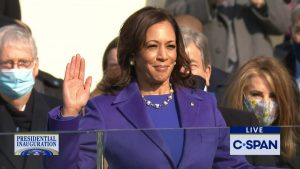 The ceremony was unlike any inauguration due to COVID-19. Those at the event were masked and socially distanced. However, Gold-Biss explained that the event was not open to the public mainly due to security concerns surrounding recent political violence. Gold-Biss said the city of Washington is under lockdown, which makes for another unusual historic moment.

“There are over 25,000 National Guard troops in the city of Washington, which is unusual. It hasn’t been that carefully guarded since the Civil War. Even during the second World War, it was not that carefully monitored,” explained Gold-Biss.

Gold-Biss added that despite the difficulties the  country has faced, Americans should be proud about the stride they have made.