After nearly two months, a construction project on a stretch of Theodore Wirth Parkway where Minneapolis borders Golden Valley is finally complete.

In early July, the city of Minneapolis and the Minneapolis Park and Recreation Board began work on Theodore Wirth Parkway between Golden Valley Road and 29th Avenue North. 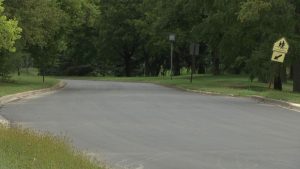 The Minneapolis Park and Recreation Board started work on Theodore Wirth Parkway in July. The project just finished this week.

The road was notorious for having bumps, cracks, and uneven pavement caused by normal wear and tear, soil conditions below the surface, and bus traffic.

The project was supposed to last four weeks, but Minneapolis Park Board officials say the construction lasted several weeks longer than anticipated due to the discovery of macadam, a no-longer-used paving technique that requires special disposal.

“That delay, they needed to actually landfill the material, so it took a little while to figure all the logistics out before they could move forward with the project,” said Golden Valley City Engineer Jeff Oliver.

“Next year, the city of Minneapolis will put the chip seal on this section of pavement, which is sort of the red-colored chips that get rolled into the pavement that makes the park system unique,” said Dan Elias, a project manager for the Minneapolis Park and Recreation Board. “That section of pavement would be due, essentially, for another seal coat on like a 10 to 20 year cycle. That would hopefully get that pavement to last 40 to 50 years.”

Meanwhile, phase two of the project is scheduled for October. Crews will resurface Theodore Wirth Parkway between the railroad bridge and Plymouth Avenue North.