“You know people have been working really hard this week and have been for years actually,” said John Munger, executive director of the Loppet Foundation, which is organizing the event. “So we’re going to be completely ready for this event come Saturday and really excited.”

Crews have been working hard to get Theodore Wirth Park ready for the event. Much of the seating is in place, temporary venues are going up and the course itself has a meter of snow for the 130 athletes from around the world that plan to compete for a championship.

It’s the first time in two decades that the United States has hosted the Cross Country World Cup. It’s why organizers are especially thrilled to be hosting the event at Theodore Wirth Park. 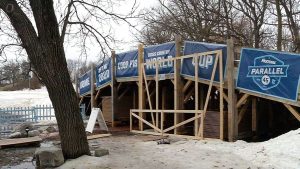 Warmer weather “not a concern”

Meanwhile, despite the warmer weather in recent days, organizers expect the course to hold up.

“We made a meter of snow pretty much on the whole course,” Munger said. “We made extra piles periodically, and then we pushed out new piles last week when we saw this warm weather coming. So we’re feeling really good on the snow.”

Parking is limited, so they’re encouraging people to bike or take public transportation.

Otherwise if you have to drive, they’ll have shuttle service available on Tuesday from Parade Stadium in Minneapolis or the The Shops at West End parking ramp in St. Louis Park.