The Blake School is celebrating after winning a prestigious debate award. The team won the National High School Debate Tournament for the second year in a row. However, this year the tournament was virtual for the first time ever.

“We were thrilled at the effort of the entire squad,” said Shane Stafford, Blake’s director of debate. “Winning a debate tournament with a hundred or more teams is incredibly difficult. Everything has to go right. Everybody has to pitch in.”

Blake’s 2019-20 debate team included more than 60 members ranging from eighth to 12th grade. Some students, like this year’s captain Morgan Swigert, have had a goal of winning since freshman year.

“We have spent four years researching, writing, practicing and traveling to tournaments to prepare for this championship,” said Morgan Swigert, captain of the Blake School speech and debate team. “Finishing my debate career with this win was incredibly satisfying and exceeded my wildest expectations. Additionally, seeing the entire team, our whole coaching staff, Blake faculty members, and even Blake alumni come together to support us this weekend was astonishing. None of this would have been possible without them.” 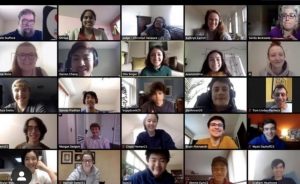 How did a virtual tournament work? Stafford says organizers utilized Zoom and created rooms for competitions.

“So, we’d check into a room, two debate teams, and a judge, and an elimination round with three judges and some observers, coaches would observe,” explained Stafford. “We would carry out the debate in the Zoom platform, and it actually turned out to be excellent.”

The topic for this year’s public forum debate was the pros or cons of the U.S. military withdrawing from the Persian Gulf.

“We had 20 students helping out and several coaches and alumni, so it was a squad effort,” said Stafford.

After a rigorous elimination round, senior debaters Morgan Swigert and Jack Johnson, came out the winners of the National Tournament of Champions.

“It was amazing to win this championship for a second time. When I began debate as a freshman, I never dreamed that I would exit the activity of a national champion. None of this would be possible without the incredibly hard work of Morgan, our coaches, and the rest of the team,” said winner Jack Johnson.

Blake debaters have traveled to 32 tournaments and won 49 team awards and 46 individual speaker awards. The team has won seven tournaments where the competition has included up to 180 organizations.

You can see team rankings in this year’s tournament by clicking here.