The Brooklyn Park City Council officially canceled Tater Daze in Tuesday night’s meeting. Organizers had already canceled the parade and the Spud Run. But, staff recommended to cancel the event because they felt they couldn’t guarantee appropriate social distancing. 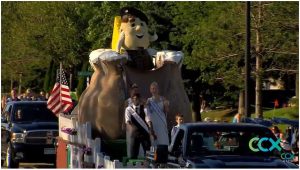 “I totally support canceling it because of everything going on,” said council member Susan Pha “We are not going to be able to control social distancing and the crowd.”

Tater Daze historically celebrated the area’s potato farming heritage. Because of COVID-19, the festival had already been postponed and drastically scaled down. There would be no inflatables, no vendors, a modified beer tent and modified games. The council voted 7-0 to cancel Tater Daze in its entirety.

The 2020 Brooklyn Park Tater Daze Festival has Been Canceled

The recreation and parks department has three concerts in the park planned plus three drive-in movies that would be projected on the side of the community activity center. These would be from mid-July through the end of August.

“I’m not sure how we are going to do the ones left on the schedule,” said West-Hafner. “Hopefully we can figure that out. Like the movies in the park, how do you keep people from being in lines for the bathroom? There might be other things that need to be canceled.”

The city still hopes to recognize Brooklyn Park’s potato farming history through a few remaining events.  Recreation and Parks plans to hold two outside walking tours, a Fall Festival and a Norwegian Christmas on the Farm. Director Jody Yungers mentioned incorporating an emphasis on heritage in both of those events.

The city also hopes to develop a community cookbook called “Bringing Together Our Past and Present” by engaging the staff and community for the area’s favorite potato recipes.

The Tater Daze festival has been under scrutiny in recent years. Council member Lisa Jacobson alluded to previous conversations about canceling Tater Daze before voting for the cancellation.

“I know there was a movement to do away with Tater Daze in 2020. There were conversations around that and changing it to something else,” said Jacobson. “I just don’t want this to be an open door to do that in 2021. I want us to look forward to 2021 and having the best Tater Daze we’ve ever had.”