You could say the governor’s stay-at-home order was the order that launched a thousand batches of bread.

People pulled out cookbooks, stocked up on flour, started up their ovens, and posted the fruits of their labor on social media sites.

One baker posted pictures of her bread from “Blue Ribbon Baking,” the cookbook of Robbinsdale’s most famous baker, Marjorie Johnson. It’s no surprise that Nonna Rosa’s Italian Ristorante owner Tina Suglia posted about her family members making Italian pastries. And after her last batch of peanut butter blossoms, Golden Valley City Council member Gillian Rosenquist declared she was just going to leave her Kitchen-Aid mixer on the counter from now on. 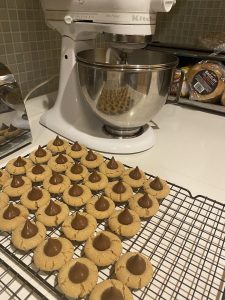 For Amy Fisher from Robbinsdale, baking is a way of coping.

“It helps me feel like I can control one aspect of self-isolation,” said Fisher, who limits her grocery store trips to once every 10 days. “If I have flour, I can make any baked good and not worry about what’s in stock. It also lets me feel like I can leave the bread, tortillas and buns at the store for others with less time.”

Fisher isn’t a novice to the kitchen, but the busyness of life often got in the way of baking a loaf of bread. By working from home, she can take a break to knead dough or preheat the oven as a way of preparing for her family’s meals.

“Baking means I don’t have to plan ahead as much,” explains Fisher. “If we decide to make hamburgers with the ground beef we have in the freezer, I can start buns at lunch and not need to run out just for that one item.” 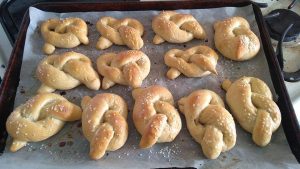 “I think my family ate 50 percent of the bread from last week, so I’ve slowed down after the initial excitement,” said Fisher.

However, she plans to try to make crackers from her leftover sourdough and maybe make tortillas again for the first time in years.

Kelly Groehler from Robbinsdale has always posted, in her words “an annoying-large number of food photos.” For her, baking is a hobby. It’s how she relaxes. But Groehler noticed something new happening on social media in regards to her hobby a few weeks ago.

“I saw an uptick in requests for recipes a couple of weeks ago, once we all started the physical distancing, including one recipe from halfway around the world by a friend in Thailand for a family recipe,” said Groehler.

So Groehler decided to just post a picture of the card and just invite everyone else to start posting and sharing their recipes in a Facebook group called The Global Family Recipe Box. People post handwritten family recipes like ‘Mom’s Chocolate Mayonnaise Cake’ or ‘Aunt Alyce’s recipe for pecan dip.’

“It’s a way to connect with each other, no matter where we are in the world and celebrate what we have in common—food,” said Groehler. “Having friends from other countries share their own family favorites has been terrific. We made a killer jerk chicken chili last night from a friend with family in Jamaica.”

Groehler added a philanthropic ask too.

“I figured that whether or not people cook, they might want to help others with food access,” said Groehler. “So I added the link to the Global FoodBank Network.”

The link has raised more than $200 so far for the Global Foodbank Network. On the site, you can post, donate, or just scroll.

“As more states and countries move to stronger quarantine measures, two things are inevitable. We’ll all be cooking more at home and the food banks will be fighting to keep up with demand,” said Groehler.  “We all deserve access to food.”