Before any actor takes the stage for their big show, it requires weeks of preparation.

Lyreshia Ghostlon-Green has several shows coming up in April, and in the world of theater, practice makes perfect.

“It takes a number of hours of just really going deeper, and as soon as you feel like you’ve reached a good spot, there’s always more to be done to even make it more realistic,” Ghostlon-Green said, when asked what it takes to be a successful performer.

This Wayzata High School senior has been involved in theater since she was in middle school.

It’s an activity the she hopes to one-day turn into a career.

“I find it very therapeutic for me, and also humbling in a way,” Ghostlon-Green said. “You’re able to kind of step into somebody else’s shoes and gain knowledge and different perspectives on what it’s like to be somebody else for a little bit.”

This year alone, she has been involved in three of Wayzata’s shows.

Wayzata High School Theatre Director Sonia Gerber has nothing but praise for the young actress.

“She’s just someone I loved working with both inside of class and outside of class, and that I really admire as a student,” Gerber said. 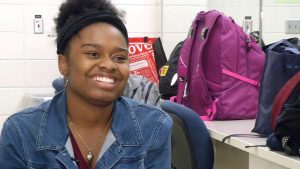 ‘Admiration’ isn’t a word that she uses lightly. While preparing for any role can be challenging, it’s nothing compared to what Ghostlon-Green has encountered in real life.

“Both my parents are deceased. My mom passed away four years ago, and my father before I was born,” Ghostlon-Green said. “And so, growing up, my life has not been the easiest.”

In the years since her mom passed, she’s had to continue going to school, and she works a part time job to help pay the bills.

“I think it’s hard enough being a teenager when everything in your life is stable, and Lyreshia is someone who’s had to grow up quickly and early,” Gerber said. “She takes care of herself.”

All the while, theater serves as a distraction from the outside world. It’s the one thing Ghostlon-Green prioritizes over anything else.

“It’s kind of like my therapy in a way,” she said. “But it’s also really nice to be able to share these stories and experiences with people.”

The school year will end in a couple of months, but Ghostlon-Green’s impact on Sonia Gerber will be everlasting.

“I think she’s someone who is so strong and so driven and so smart,” Gerber said.

Meanwhile, Ghostlon-Green will attend Minnesota State University, Mankato next year, where she will study to become an actress.

**This story was recorded before the COVID-19 outbreak shut down schools.