“Hailey can take those emotions and maybe the human conditions and has the ability to express and feel those things in ways that aren’t visible to the outside. Hailey tells those stories through internal dialogue or sides that we may not see in public with these stories and presents them as intimate moments,” said Cameron Browne, a visual arts instructor.

“Often Hailey wants to get at really raw things and complex emotions,” said visual arts instructor Kathryn D’Elia. “That can be kind of upsetting but very human. She’s a very gifted storyteller.”

The raw emotions seen in Hailey’s work were felt beyond the borders of Perpich. So much so, that Hailey received the highest honor at the 2021 National Scholastic Art and Writing Awards.

“I was a little stunned,” Hailey said. “I didn’t know how to react I was like thank you. It’s pretty fantastic.”

Hailey earned a $10,000 scholarship through the award. In the art category, Hailey was one of eight selected among the thousands of works submitted.

“Hopefully it’ll give me a lot of opportunity,” said the high school student. “I want to be a storyboard artist for like Pixar or DreamWorks because I’d love to tell my story.” 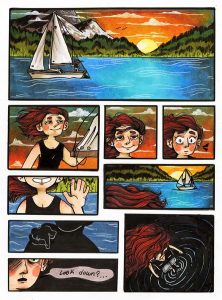 Ready for the Future

The future storyboard artist will spend the next four years at Ringling College of Art + Design in Florida.

“I really do hope it causes some discussion throughout media or people,” said Hailey, who is passionate about mental health. “Just to know that mental health, it’s a normal thing to have problems and to understand it and not push them down.”