The 2020-2021 school year has been anything but normal for students at Champlin Park High School.

“I feel like a lot of people, including me, are just missing that in-person contact to just really learn from a teacher and then connect with them,” said Josh Strong, a senior at Champlin Park.

Yet such is life in the world of education, as the COVID-19 pandemic has forced students to take all of their classes online. Although in Strong’s case, he wouldn’t have actually taken classes at Champlin Park this year, even if in-person learning was still happening.

Yes, Strong would still go to the Brooklyn Park campus to participate in sports, considering that he’s on Champlin Park’s football and basketball teams. But since his junior year, Strong has been earning college credits at the University of Minnesota as a PSEO student.

“Personally my goal is to graduate in two years from college and get my degree,” Strong said. “And then maybe grad transfer somewhere else, or maybe just get my masters paid for on a scholarship at [the University of Minnesota] Duluth.”

Strong has already committed to attend the University of Minnesota-Duluth on a basketball scholarship. But he wants people to know that he’s much more than an athlete. Strong has a GPA of 4.24 and he says he received a 35 on his ACT. Division II schools don’t offer full athletic scholarships, so Strong received a partial athletic/partial academic offer package that works out to being a full-ride. 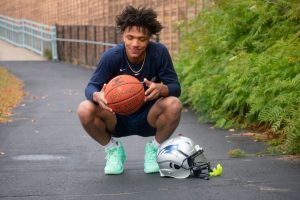 “When a younger kid can see a kid like me who’s playing sports, who’s an African-American person but also able to get post-secondary credit while I’m still in high school, that can be sort of inspirational,” Strong said. “I feel like I can be a role model for some kids who want to do similar things.”

Strong says his parents always taught him that school comes before everything else. When he was younger, they made sure that he had his school work done before he could go to the park.

Those values have stayed with him to this day.

“I’m the type of dude where I want to get everything done before I go and have fun, because then I feel like I can actually enjoy myself,” he said.

With just a few months left before he graduates from Champlin Park, he’s going to stick with that academic mindset, because there’s still one significant goal he’d like to accomplish.

“Right now, I think I’m class ranked two out of everybody else,” he said. “So I’m expecting to hopefully be valedictorian.”

In other words, there’s no senior slide on the horizon.

“It’s just a testament of who he is,” said Brian Larson, an English teacher at Champlin Park who taught and coached Strong when he was a sophomore. “He wants to be the best at all he can do. He wants to push himself.”

Larson says that Strong has a mature approach when it comes to academics, which is rare for a student of his age.

“He has always struck me as a kid who wants to know,” Larson said. “Not necessarily that, ‘I want to get an A,’ but ‘I want to learn this and I want to know this cause this is going to help me in my life and help me change the world or change my perspective.'”

Going forward, Larson says that the sky is the limit for Strong.

For the record, Strong says he plans to study entrepreneurship when he gets to college.

A state title in basketball?

Aside from academics, Strong is hoping to hear good news from Governor Walz this month regarding the reactivation of youth sports. He wants the basketball season to start because he’d like to try to win a state championship this year.

“So definitely have a lot of goals to keep me striving for as I finish my high school career,” he said.