Biology class can sound like a foreign language to people unfamiliar with the subject matter, but for Champlin Park senior Georgie Stammer, it’s one of the many areas where she thrives. 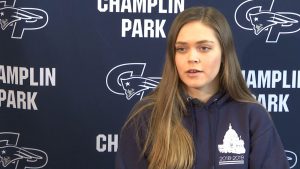 “I really enjoy math, I really enjoy biology right now,” she said. “It’s a lot easier for me to learn those because I’m really interested about them and I’m curious to learn more in those subjects.”

Yet math and biology aren’t the only areas where she excels. This student with a 4.2 grade point average is a captain on Champlin Park’s tennis and lacrosse teams, and she received an Academic All-American award as a member of the school’s speech and debate team.

“Georgie has been a fabulous speech student on our team for the last four years,” said Katherine Widestrom-Landgraf, Champlin Park’s speech coach. “She is an incredible competitor. But what’s remarkable about Georgie as well is she is willing to mentor and assist new students on our team.”

However, acting as a mentor isn’t the only thing she does for her classmates.

“Yeah I’ve done a lot of the senior pictures this year,” she said.

Georgie has her own photography website that showcases how she uses the camera lens to artistically capture other Champlin Park students.

“I’m still working on some of [the senior photos], because I really care about the quality of what I do,” she said. “So it kind of has taken me time to perfect that process.”

All good work takes time; and occasionally, the same can be said about important life decisions, as Georgie is still undecided on a college and major.

“I don’t know what Georgie will do,” Widestrom-Landgraf said. “But I know that whatever she chooses to do, she will do it well, and she’ll be fully invested.”