St. Therese of New Hope, the oldest and largest of the St. Therese senior living facilities, will soon undergo a massive makeover — one that will take four years to complete.

The nonprofit care provider recently received state approval to transfer 54 nursing home beds from New Hope to a new senior living campus that will eventually be constructed in Corcoran.

The New Hope campus will tear down a section of skilled nursing units and replace it with a brand new section, creating larger, more “homelike” rooms with private bathrooms and showers. St. Therese will also build a new independent living building attached to an existing seven-story building. Extensive renovations will occur at the existing apartment units. It’s all part of an update to make updates and meet the demand for a full continuum of senior care.

“Because of the baby boomers, there is a need for that, and we’re just on the cusp of some of the first baby boomers needing services coming in are needing some services. So there’s been a lot of building,” said Barb Rode, CEO of St. Therese.

The New Hope facility renovation will include the addition of a swimming pool and an expanded fitness and wellness center that the general public will be able to access. An updated heating and cooling system for resident comfort is also part of the project.

Construction at both the New Hope and Corcoran locations is expected to begin next spring. Both projects total a more than $100 million investment by St. Therese. Rode says no one will be displaced during the construction.

The Corcoran project is part of the city’s future Town Center. The senior living campus will be located near the intersection of County Road 10 and County Road 116.

In addition to the 54-bed skilled nursing care center, St. Therese of Corcoran will include a transitional care unit and a four-story, 154-unit building for independent and assisted living.

“We really want to make it a community kind-of-facility,” said Rode.

The design of the senior living community is described as an “urbanist village.” It will be connected to an outdoor plaza and amphitheater and provide a fitness center, cafe, ice cream shop and resident craft store that will all be open to the public. 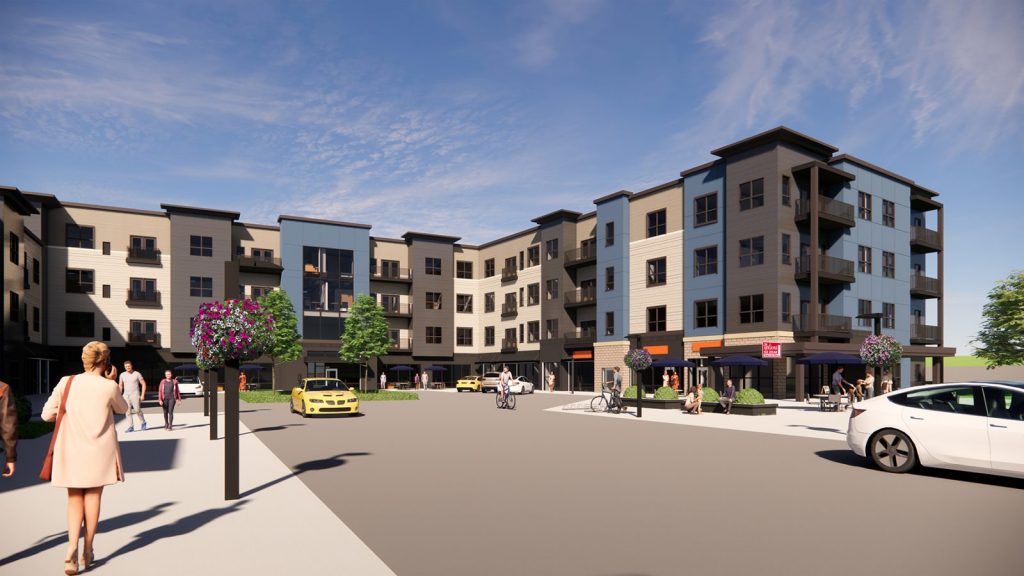 Rendering of St. Therese of Corcoran